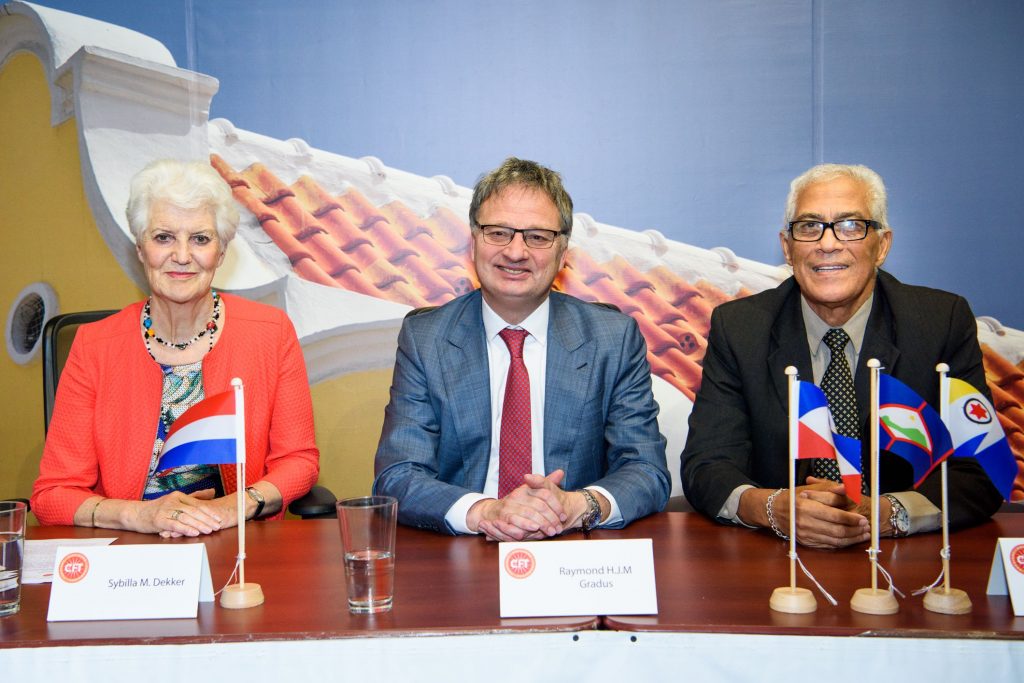 The Hague – From March 26th to 28th the Boards of financial supervision visited the Netherlands. There they spoke with State Secretary of Internal Affairs and Kingdom Relations, the Minister of Finance, members of the First and the Second Chamber and they met with the Ministers Plenipotentiary. They also visited the Council of State and the General Audit Chamber. It was the first time that the Boards travelled to the Netherlands in the current constellation. The main topic was the mostly troublesome situation of the public finances of the three Kingdom countries in 2017. Attention was given to the background of the current state of affairs and how it should be dealt with.

The public finance of Aruba requires special attention. The public debt is growing towards 90% GDP. Aruba will not manage to comply with the LAft norms in 2017 and 2018, contrary to 2015 and 2016 – although that was only with many incidental measures. The government in Aruba, which took office in November, has drawn up a plan to achieve sustainable public finances with a debt ratio of 50% GDP in the long term, and will already take measures in 2018.

On March 2, the CAft advised to design the budget in 2018 in such a manner that the deficit in 2018 would at least be lower than the deficit in 2017. The CAft also mentioned the need to adopt in the short term a new ambitious norm framework for 2018 onwards and integrate this in the regulations.

For the first time in years, Curaçao has no balanced budget and the public debt is on the rise. Therefore, Curaçao has taken measures that will be implemented via a budget amendment. This budget amendment was recently submitted to the Cft and it is currently being assessed. In particular attention shall be paid to the structural effect of the measures. Furthermore the need to have a risk analysis for the 2018 budget prepared by the Curaçao government in order to manage the risks at an early stage was discussed.

Of course attention was paid to the extraordinary situation in Sint Maarten, which in 2017 was reasonably well on its way to align its budget with the financial norms and comply with the legal terms. For the first time in years 2016 showed a surplus. In 2017 the impact of the hurricanes caused a substantial deficit on the budget. The need was emphasized to timely draw up the mandatory documents related to the budgetary and accounting documentation and to get the economy up and running again. The reconstruction fund obviously plays an important role in restarting the economy and it will also have a positive effect on the deficit, which will therefore decrease. This underlines the need to conclude the talks between the Netherlands, Sint Maarten and the World Bank as quickly as possible. The financial situation on the BES islands was also discussed. This attention is positive for the BES islands in the coalition agreement in financial terms as well. This attention is good for the further development of the islands. In addition, most of these special municipalities of the Netherlands are still facing a number of challenges. While Saba has received unqualified audit reports since 2014, other islands still have some steps to take.

The purpose of the trip was to get acquainted with the various discussion partners in the Netherlands. The role and function of the three Boards was discussed. The evaluation of the Kingdom Act on Financial Supervision and the deliberations between the Netherlands and Aruba on a new legal norms framework were also discussed.

The conversation partners in The Hague showed great interest in the Caribbean part of the Kingdom and the developments that are going on there. At the Council of State, where the Colleges were received by Vice-President Mr. Donner, and various state councils, including the state council for the Kingdom, Ms. Schwengle, extensive exchanges of views were held on the various current events. In particular, the challenges the ABC islands are facing in connection with the developments in the neighboring country Venezuela were discussed. Amongst other, the Kingdom Act on Financial Supervision and the question whether this Act offers the Cft sufficient tools to do its job were with the State Secretary for the Interior and Kingdom Relations. The situation on Sint Maarten and the reconstruction were also deliberated on with the Minister of Finance. The meeting with the Ministers Plenipotentiary took place during an informal lunch, and the different situations of the countries were reflected upon.

The chairman and the members look back on a successful trip. The Boards visit the Netherlands in principle once every two years.