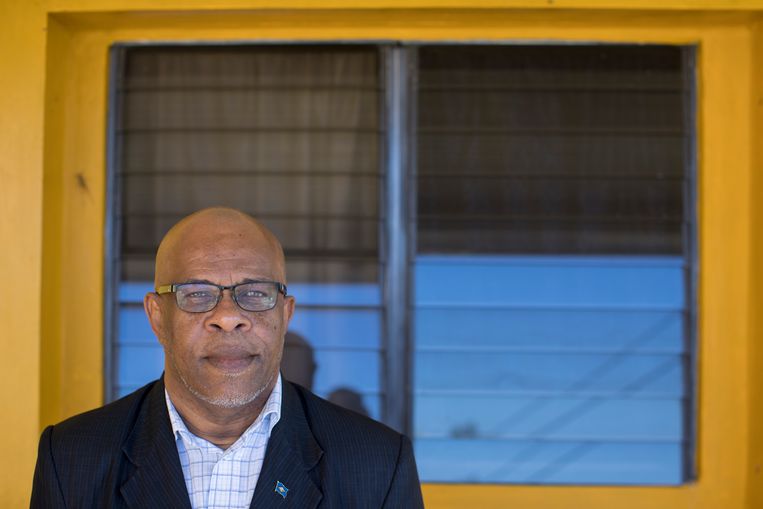 Clyde van Putten on the veranda in front of his house. Photo ANP

In an article dated yesterday, May 8, the Dutch newspaper De Volkskrant wrote about the situation on St. Eustatius, the work of Mike Franco and the opinion of some citizens whom the paper interviewed in the process of writing the article.

According to the author (Kees Broere) Government commissioner Mike Franco, appointed by The Hague, is busy with a ‘thorough cleaning’ on St. Eustatius. After 2.5 months the sounds are moderately positive. But, writes Broere, in the background the old rulers, such as Clyde van Putten, continue to provide harsh criticism.

“The Hague accused us of so many things. And see what government commissioner Mike Franco and his people are doing now: they carry out our plans. Franco is nothing. The population has been deceived. But they will leave here too, take that from me. Good or bad, they will leave this country. And otherwise people will revolt. They say that too. They are on my side. I will not give you details. But know that the Netherlands will regret it”, said Clyde Van Putten in his interview with Broere.

Broere also interviewed Mike Franco: “I actually only have one mission,” Franco told Broere. “Make St. Eustatius wonderful again. It is not an island that has to be built up; it must be restored. For years, it lacked overdue maintenance. This must change in the coming years”, according to Franco.

De Volkskrant writes that the job may cost up to 60 million euros, also intended to make the island ‘more resilient to political influences’, in other words: to prevent future abuse of power by people like Clyde van Putten.

Another person interviewed by Broere is Iris Liu, member of the so-called Social-Advisory Council. “When we started, in February, there was a bad atmosphere. Now you see that people want to give us time before they come to a conclusion. I no longer feel the tension that was in the beginning”, said Liu in her interview with Broere.

Asked if she is seeing an improvement, Liu answers: “Whether I see improvement? How will I say it? Improvement. It was honestly quite a mess here. But now, very slowly, you begin to notice that people are putting attention to Mike Franco’s plans. He and his people are approachable at any time of the day. They listen. That alone makes them popular”, according to Liu.

The original article as published in De Volkskrant can be seen here: https://www.volkskrant.nl/nieuws-achtergrond/nederland-gaat-spijt-krijgen-zegt-de-aan-de-kant-geschoven-leider-van-sint-eustatius-clyde-van-putten~b23d603a/