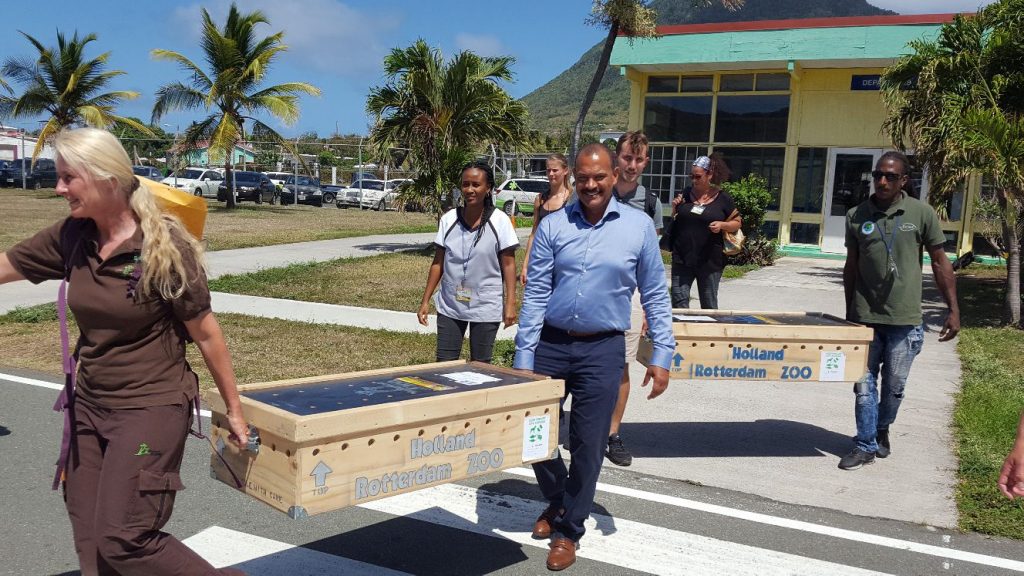 Kingdom Governor Mike Franco is lending a hand with the loading of the iguanas in the airplane. Photo: RCN.

Oranjstad- On Monday May 14th, the Government Commissioner, Mr. Franco, has handed over four Statian iguanas at the airport of St. Eustatius to Rotterdam Blijdorp Zoo. The iguanas will be joining breeding programme at the Dutch Zoo.

The ‘Antillean iguana’ (Lesser Antillian Iguana) in the Caribbean Netherlands is found only on St. Eustatius and is seriously endangered. There are only a few of these iguanas on St. Eustatius, an estimated 400 to 600 animals.

Endangered
The species is on the IUCN ‘Red List’ of endangered animals, and should not be confused with the larger ‘ green iguana ‘ of the Leeward Islands, which on the increase the Caribbean and is displacing native species. The chance is big that Statian species becomes extinct within 10 years, if no action is taken.

There is great hope that the iguanas will reproduce in Rotterdam. If the iguanas reproduce themselves there, it is the intention to in the future bring back the eggs or young animals to St. Eustatius. The programme is collaboration between the Blijgaarde Zoo from Rotterdam and STENAPA, and is supported by Foundation RAVON (Reptiles, Amphibians, and Fish Research Netherlands).

STENAPA, the foundation that manages the national parks of Sint Eustatius, is committed to nature in St. Eustatius and the survival of the Antillean Iguana. Government Commissioner Franco: ‘ I am happy with the work of STENAPA and their commitment to the preservation of the beautiful nature of St. Eustatius. I fully support this cooperation between Blijdorp Zoo, STENAPA and Foundation RAVON and hope this programme can make a successful contribution to the survival of the largest land animal on St. Eustatius ‘.