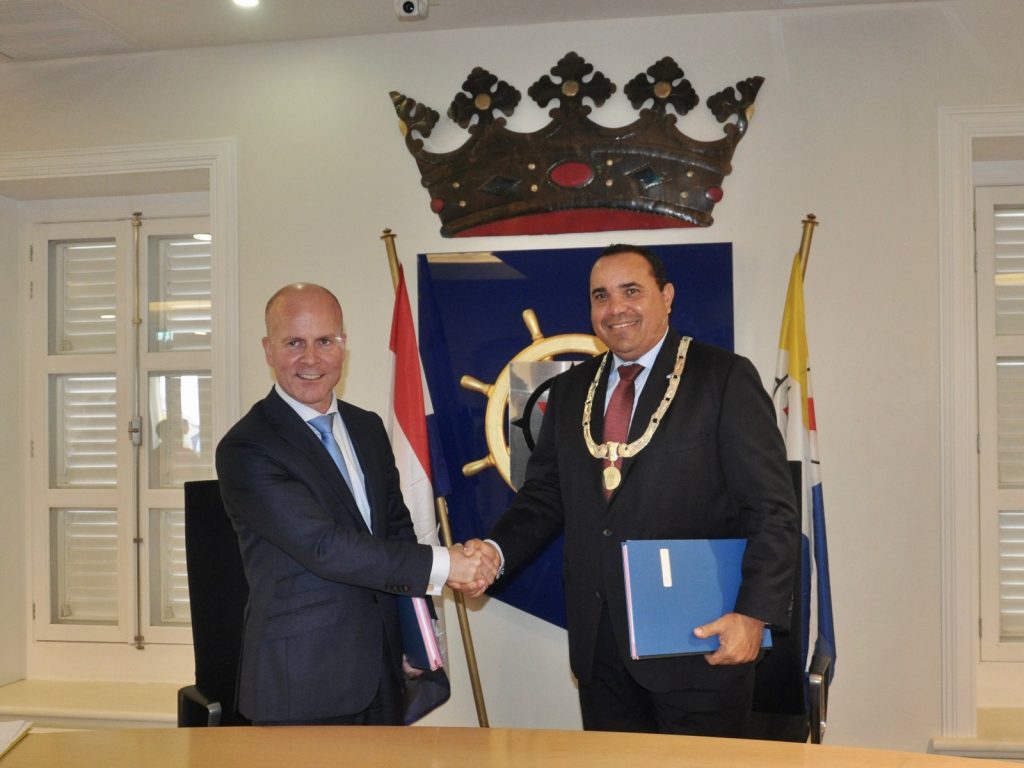 The governement agreement between The Netherlands and Bonaire has been signed this afternoon. Photo: Sylvia de Leon.

Kralendijk – This afternoon, the Government Agreement between The Hague and Bonaire was signed by State Secretary Raymond Knops on behalf of The Netherlands and the Island Governor, Edison Rijna, on behalf of Bonaire.

The agreement makes extra funds available for the island, which had already been reserved via de so-called regional envelope. However, Knops had made it clear that he only wanted to make the funds available if he had sufficient confidence in the plans of the local government.

At the urging of Knops, the Executive Council drew up a list of priorities. The document also includes plans for the strengthening of the local government organization, further training of civil servants and assistance by Dutch civil servants. A special program manager must ensure that the agreements in the agreement are actually implemented.

MPB in favor of agreement
The votes in favor of the agreement by opposition party MPB , was initially met by some raised eye brows as the agreement was mainly seen as a plan of the sitting government coaltion. “Actually, it does makes sense,” said MPB party leader Elvis Tjin Asjoe in conversation with the BES-Reporter. “The agreement contains many things on which we, as opposition, have long insisted. Thanks to this agreement, many things will be achieved which are important to the island and the population, “said Tijn Asjoe.

Tjin Asjoe therefor believes that it would have been odd if the MPB had voted against the agreement. “All MPB council members were free to vote according to their own conscience. In the end however, we all voted in favor “, said the MPB Party Leader.

The MPB leader stressed he did not agree to the statement made by some, that the agreement amounted to an indirect intervention by the Netherlands. “There are many concrete action points in the agreement. Whichever government comes in after the election of 2019, will have to work along the lines of this agreement. That assures continuity”, according to Tjin Asjoe.