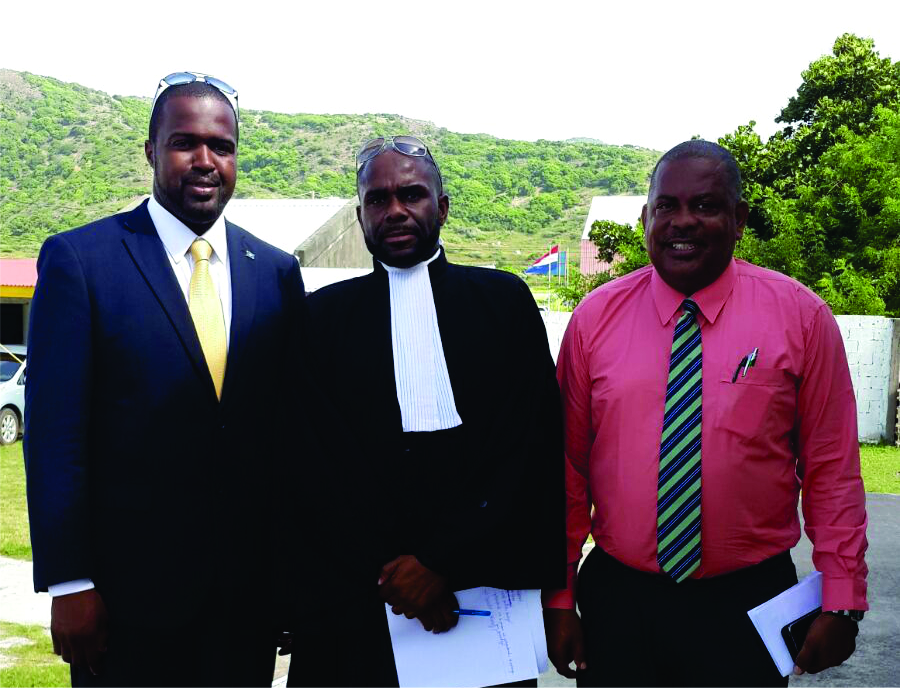 The two deposed commissioners on St Eustatius for the PLP/Merkman Coaltion, Charles Woodley and Derrick Simmons have lost the appeal sought by former acting Island Governor Julian Woodley against an earlier verdict, which stated that the Island Governor had the obligation to sign decisions by a majority in the Executive Council, even if he disagreed with those decisions or considered them unlawful. The appeal by Woodley and Simmons was not lost based on legal arguments: The Court ruled against them on formal grounds.

Woodley and Simmons did not proceed with the legal process as to them it seemed futile, given the present circumstances. The commissioners were forcibly removed from office by The Hague months ago, while the acting Island Governor of the time, is by now enjoying a well-deserved pension. The position of Island Governor on St. Eustatius was, as history shows, never a very enviable one.

The bill for the “lost” court case is for Woodley and Simmons who -let us not forget- in first instance WON the injunction against the Island Governor.

The bigger question, however, is whether this is a fair battle. Former minister Ronald Plasterk at the time immediately exclaimed that the legal costs of the interim Governor would be borne by the Public Entity St. Eustatius, but that Woodley and Simmons had to pay the lawsuit out of their own pockets. In the opinion of Plasterk, the legal costs from the deposed commissioners did not fit into the regular expenses that could borne by the Public Entity.

The opponents of the PLP/Merkman coalition are of course exuberant because of the fact that the former commissioners “lost” the appeal and they do not shy away from ridiculing them. According to these opponents, the ex-commissioners never stood a chance anyway and the legal battle -according to them- was a frivolous one at best.

The latter, by the way, still remains to be seen. What is obvious however, is that the “fight” between the two deposed commissioners -or in a larger context between the ousted coalition- and The Hague is not a battle of equals. After all, the war chest of the State is almost inexhaustible. The Hague could literally litigate, till it has financially worn out their ‘opponents’. Which, in this case, would not take a very long time.

One can reason that ‘what goes around comes around’. But is it that simple? Especially in the present case it – if only from a legal/theoretical point of view – it would be fairer if the legal costs made by all parties, would be paid for out of public funds. Woodley and Simmons were commissioners at the time and litigated out of their position; not as private citizens.

Although it is obvious that political the Hague and the opponents of PLP/Merkman wholeheartedly disagreed with the legal argument put forward by Woodley and Simmons, it is not yet a foregone conclusion that the two ex-commissioners would -in the end- have been unsuccessful in further litigation.

Should substantive legal discussion or even litigation on administrative laws in our Kingdom depend on the question who has the deepest pockets? Perhaps this is most practical for the State, but not necessarily fair.

Another point is this: even after civil wars, there are always movements which try to achieve a ‘national reconciliation’. Examples are the efforts in the post-apartheid era in South Africa and more recently, the negotiations between the rebel movement FARC and the government of Colombia. Fighting in a country or on an island in this case, at some point in time, must come to an end.

The financial wrecking, taunting and public disparagement of the “defeated” opponent certainly do not contribute to this conciliatory process.

The three BES islands also lost the opportunity to have objective legal ruling on the question what do in those cases where an Island Governor is unwilling to sign majority decisions of a governing coalition. We would, by awaiting the legal outcome, have known for the future what the boundaries are of the ‘power’ of the island governor versus the ‘power’ of the local government.

That question will, due to the actions and decisions of both political The Hague and the ex-commissioners, remain unanswered.