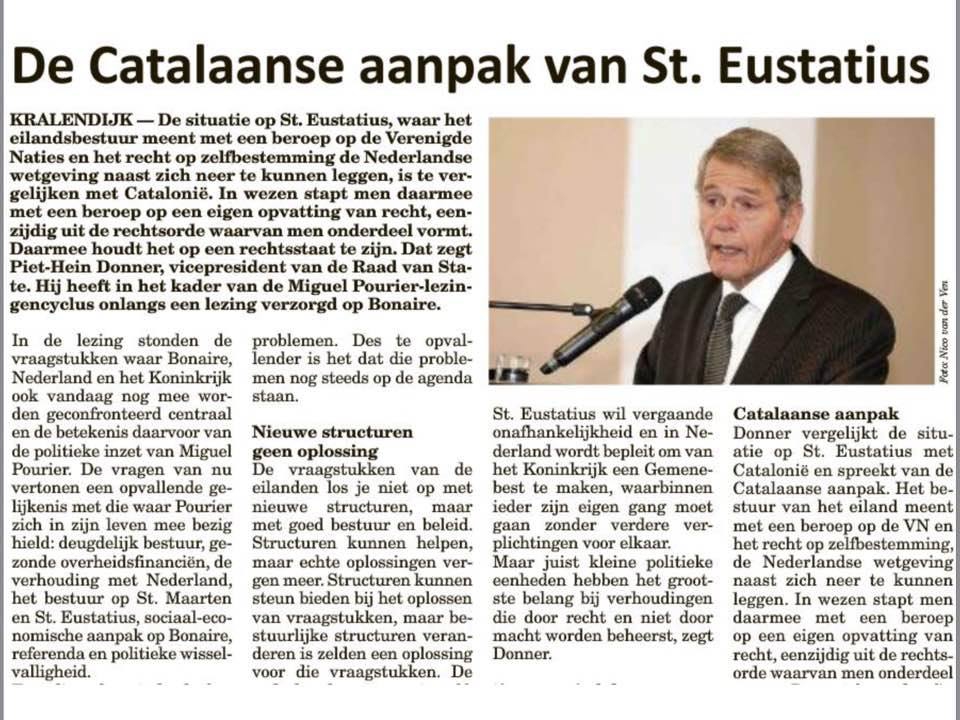 “The Indonesian/South African approach of the Government of the Netherlands”

I have taken note of the newspaper article regarding a recent speech by former Dutch Minister and current Vice-President of the Council of State, Piet Hein Donner.

In the article, Mr. Donner is quoted, among other things, as having compared Sint Eustatius’ legal attempts to stop the Government of the Netherlands from violating international law and to force it to allow Sint Eustatius to run its own affairs with its United Nations-mandated full measure of self-government to “the Catalonian approach”. Being an experienced exponent of a long line of prominent and well- respected legal minds, Mr. Donner’s statements highly surprised me, since they seem to be out of touch with the Dutch and international legal reality and jurisprudence.

I do fully agree with Mr. Donner’s assertion that it is particularly in the interest of small political units that relations are based on the rule of law, and not power. This is exactly why Sint Eustatius is applying the rule of (international) law to counter the power which the Government of the Netherlands is unjustly wielding over the populations of the islands.

Without getting into the Catalonian issue, I would like to point out that Mr. Donner, as have critics of the current coalition government of Sint Eustatius, completely misrepresents the position which the government of Sint Eustatius has taken. The motion adopted by the Island Council on May 9th, 2017, never “set aside” Dutch legislation, as Mr. Donner and others put it. It merely resolved that (elements of) Dutch legislation which is/are in violation of higher international legislation like the UN Charter, is/are non-enactable, because it/they is/are automatically overruled/annulled by said higher international legislation. This position finds its legal basis partially in verdicts of the Dutch Supreme Court, and I will gladly share the extensive documentation supporting Sint Eustatius’ position with Mr. Donner.

Mr. Donner’s opinion that “structures do not solve problems but policies and good governance do”, is just that, an opinion to which he is entitled. Other than that, it is irrelevant in the current context of international (constitutional) law.

Since Mr. Donner is making comparisons, allow me to make one of my own. A quick review of documented history will show that Mr. Donner’s arguments to “leave things as they are”, which basically means leave the (former) colonizing power in charge, are almost verbatim the same arguments and words used by the Dutch Government towards Indonesia in the 1940’s, and the South African government during the period of Apartheid.

What happened in and with Indonesia since Mr. Welter’s memorandum is well known, also to Mr. Donner who, coincidentally or not, represents the successor of Mr. Welters political party the KVP, namely the CDA. I again express the hope that the Government of the Netherlands has learned from its mistakes and misjudgments of the past, and won’t repeat them seventy years later.

Regrettably, Mr. Donner’s recent statements seem to indicate the opposite, as he is holding on to colonial positions taken by the Government of the Netherlands before the establishment of the UN Charter and the decades of decolonization which have followed. As a comparison, can one imagine any politician nowadays stating that women and/or minorities should not have voting rights, without instantly putting an end to his or her career?

If Mr. Donner wants to make a valuable contribution to the (legal) discourse regarding Sint Eustatius position, be it in his formal capacity of Vice-Chairman of the Dutch Council of State or à titre personnel, I suggest that he reviews the 36 questions which were sent to the IPKO by the Sint Eustatius government coalition on June 22nd, 2017, and provides the answers based on his vast legal knowledge and experience. Perhaps Mr. Donner could also use those answers and the documentation supporting Sint Eustatius’ position as the basis for a future public address, which I would be more than happy to attend.

Finally, in his letter to the Executive Council of July 5th, 2017, former Minister Ronald Plasterk confirms that the Charter of the Kingdom of the Netherlands (“het Statuut”) and all its adaptations comply with the requirements of the UN Charter. As such, he acknowledges the fact that the Government of the Netherlands is bound by international law to allow the Government of Sint Eustatius to run its own affairs with a full measure of self-government, and without any interference in accordance with the UN Charter and relevant resolutions.