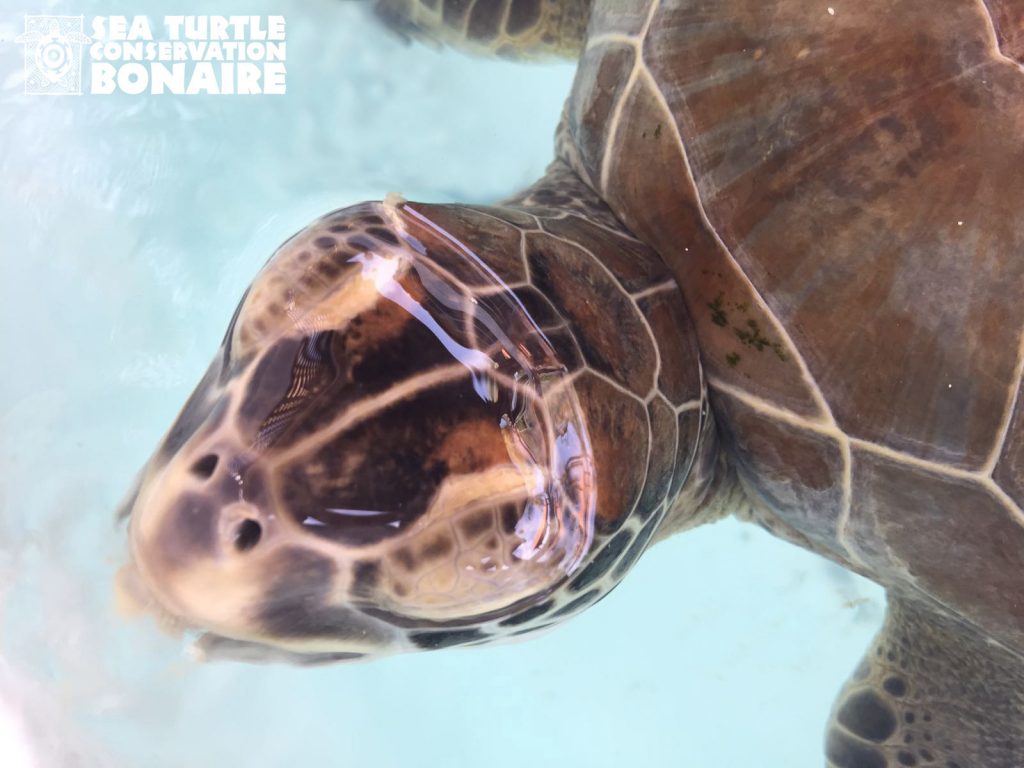 Kralendijk, 13 July 2017 – Over the past six weeks, Sea Turtle Conservation Bonaire (STCB) has successfully rehabilitated a juvenile green turtle (Chelonia mydas), named ‘Rosita’, who was found at Lagoen, floating and unable to feed herself.

‘Rosita’ was found on the 21st May by dog walkers who reported the Turtle in Trouble to the STCB Hotline. After a first assessment by STCB’s Project Coordinator, it became clear that the turtle was positively buoyant, and therefore unable to dive for food and so likely to die without help.

Over the course of six weeks, ‘Rosita’ was rehydrated, treated for any possible infection, aided in her digestion, fed well and supported in the process of achieving neutral buoyancy once more by progressively weighting her carapace. Alternative therapies given included a complimentary course of biomagnetism/energy healing treatments from Rosita Paiman, after whom the turtle was named.

Due to expert team work from STCB staff and volunteers, veterinarian Fulco de Vries, therapist Rosita Paiman, and the team at Harbour Village Bonaire, ‘Rosita’ made a full recovery and she was released back to the wild on Sunday 2nd July.

Dr. Sue Willis: “Bonaire is home to three of the world’s six endangered or critically endangered species of marine turtles. Being able to respond to and assess any sea turtle in trouble on Bonaire is therefore very important. We can’t always save their lives but at the least we can prevent unnecessary suffering’’. If you see a turtle in trouble, distress or danger, please call the STCB Hotline on (+599) 780 0433.