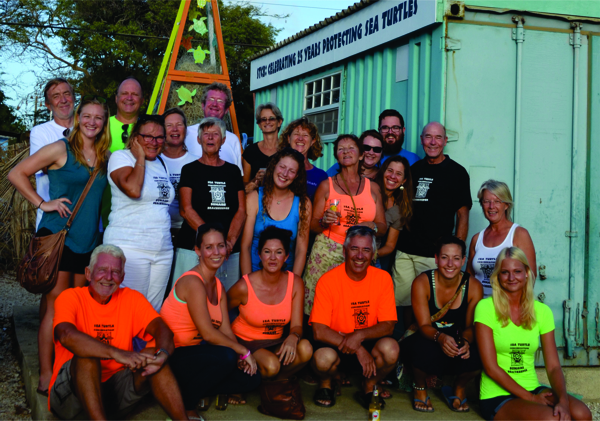 Kralendijk -Sea Turtle Conservation Bonaire (STCB) says to be looking back on a productive 2016 when it comes to the organzations’s conservation efforts. This year, STCB celebrated 25 years of ongoing work protecting endangered sea turtles on Bonaire. Local companies adopted 25 sea turtle nests, and protected a total of 2446 hatchlings. More good news for Bonaire’s sea turtles: statisticians at the Dutch Caribbean Biodiversity Database found a moderate increased trend in total number of nests on Bonaire and Klein Bonaire since monitoring began in 2002. This is without taking into account this year, which has been STCB’s highest nesting year ever with 114 confirmed nests.

This was also the fifth consecutive year of the Beachkeepers program running successfully, with 40 volunteers this year! STCB’s Beachkeepers patrol the beaches most used by turtles, reporting signs of nesting and hatching, as well as monitoring the safety status of nests. In 2016, STCB also continued its partnership with the Netherlands Organisation for Scientific Research (NWO) to study connectivity among sea turtles within the Dutch Caribbean. Together with NWO, STCB deployed three transmitters on green turtles from Lac Cai – and one of these turtles then migrated to an island in Venezuela called La Tortuga.

This year, STCB also captured and released 300 sea turtles during in-water surveys. This is the highest number of sea turtles captured since STCB established standardized methods for the in-water survey and tagging program in 2003. Another highlight of this was the fact that STCB had its first peer reviewed paper published on post breeding migrations. STCB was also part of a joint publication on growth rates of hawksbills in the Caribbean, and the organization is participating in another joint publication on green turtles.

STCB also introduced new merchandise items and increased the number of STCB vendors on the island! Turtle-lovers can now buy STCB merchandise at seven vendors around Bonaire: VIP Diving, Great Adventures Bonaire, Mangrove Center, Dive Friends Bonaire Retail, Dive Inn, Hamlet Oasis, and Caribe Car Rental, as well as the STCB office at Kaya Korona #53. STCB signed a contract with the World Wildlife Fund (WWF) for three more years of funding, and also gained an important new funder: Stichting Dierenlot. In October, STCB received a DierenLot Animal Rescue Vehicle from the new funder.
Last, but not least, STCB partnered with Wild Conscience to protect the beaches of the south and the mangroves at Sorobon. These works were part of a wider project, the Ecological Restoration of Lac and the South of Bonaire, which is coordinated by the Public Entity Bonaire and funded with the so called ‘natuurgelden’ made available by the Dutch government.