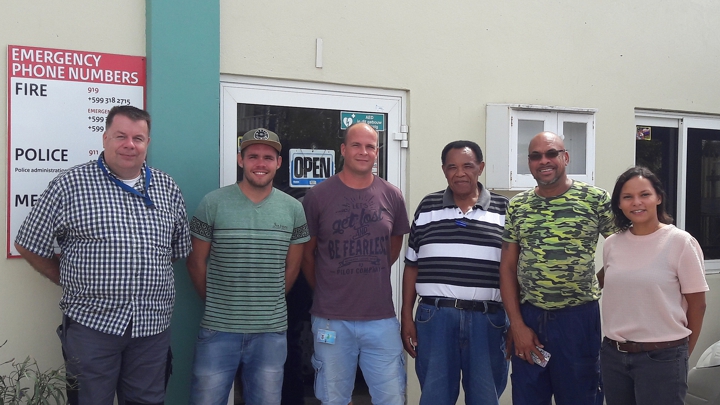 Oranjestad- On Sunday September 17th, a group of six RCN and Public Entity of Bonaire civil servants arrived on the island to assist St. Eustatius in the recovery work, following the passage of hurricane Irma.

Included in the group were Custom Officers who arrived on the island to relieve their colleagues on Saba and St. Eustatius. Acting Island Governor Julian Woodley this afternoon met with the group on to brief them on the work they will be doing and to thank them for responding to the call for volunteers. The group of volunteers will remain on St. Eustatius for one week.

Kingdom Representative, Gilbert Isabella, was present at Flamingo Airport on Sunday to wish the volunteers success in their efforts. Act. Island Governor Woodley said he was pleased with the extra hands and the expertise to assist with specific projects in the aftermath of Irma.

“I thank the RCN and the Public Entity of Bonaire for granting their civil servants time off to assist us on St. Eustatius”, said Woodley during the briefing.