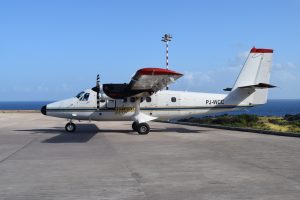 Philipsburg- History seems to repeat itself with Winair putting an end to their flights between Sint Maarten and Hato Airport in Curaçao. This is the second time Winair has started and subsequently stopped with the Curaçao route. An earlier attempt using an wet-leased Air Antilles ATR some years back had also proven not to be a successful venture.

This time around, Winair -at least intially- seemed successful on the route after Insel was left without their MD-80 airplane normally used on this route. Many passengers preferred the direct Winair flight, executed by Pawa MD-80 jets to the service provided by Insel’s Fokker50 turbo prop aircraft which are smaller and slower than the usual jet-planes.

After Insel got back on the route between Curaçao and Sint Maarten with their MD-83 jet, competition got tougher for Winair/Pawa, especially after the impact of both hurricane Irma and Maria on Winair’s core routes.

The mishap with one of Pawa’s flights being held in Haiti for 2 days some weeks ago in a dispute over unpaid bills from Pawa, has not helped the situation or the perceived reliability of Winair’s service on the route between Curaçao and Sint Maarten.

“To continue transparency and inform the traveling public, Winair announces its discontinuance of its twice weekly services to Curacao through the ACMI lease with our partner PAWA Dominicana. “Our relationship with PAWA Dominicana remains strong and we look forward to exploring other various opportunities in the aviation industry in collaboration PAWA in the future” according to Winair CEO & Prisent, Michael Cleaver in a statement released to the press this afternoon.